You are here: Home / Education / Land-lines soon to be a relic of the past on ISU campus 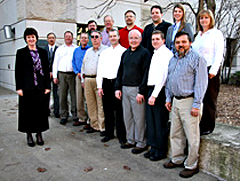 All the phone lines for the Iowa State University campus soon will be “in the cloud.” So-called “land lines” will be a thing of the past for making calls to and from the Ames campus.

The university is putting its telephone network online, meaning the calls will be routed over the internet rather than over a traditional telephone line.

“Previously we had a system on campus and so we were responsible for the maintenance of that system,” says Angela Bradley, director of information systems for ISU.

“We were responsible for all the trunking which are the links that go to the rest of the world — to the public switch network — and those costs were much higher than we will be paying for this Internet2 service that’s in the cloud.”

ISU officials estimate the savings for making this switch will be in the range of $600,000 a year. Internet2 is a non-profit consortium of research and educational institutions. The “cloud” processing the calls will be based in Houston or New York. Bradley says Iowa State is one of the “early adapters” of this new system.

“There is a lot of interest in it,” she says, “and it does seem like a great way for us to use our combined power, if you will, to get what we need for higher education, to get the features that people want and to set things up with more flexibility than some of the corporate-sorts of telephone systems.”

Iowa State University has more than 10,000 telephone numbers plus hundreds of lines that handle the overflow calls to automated answering services. New phone sets are being installed on desks all over the Ames campus and the eight-week-long conversation should be done by July 1.

Bradley says the new system lets professors program things so calls can ring into their desk phone and their cell phone at the same time. New features will be rolled out in the fall. Bradley says some of the feedback from already-converted campus customers is about the improved sound quality of calls being made on the new system.

“It’s because it’s all digital, so it’s taking out all that background noise,” Bradley says. “It’s just digitizing your voice and bringing your voice back, so if there was a problem on the network you could hear clicks and hisses, but as long as the network is clean and you have plenty of bandwidth, all you get is the voice.”

The ISU staff who are no longer needed to maintain the old telephone system are shifting to maintaining the data network that supports the new system.