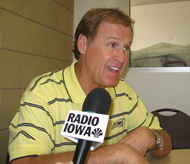 Iowa Speedway designer Rusty Wallace will be in Newton on Sunday for the Iowa Corn Indy 250. It will be the seventh time the IndyCars have run at the Iowa Speedway.

“Every year that race comes to town I’m always wanting to know how they are going to look this year, how everything’s going to be different. It always surprises me,” Wallace says.

“Every year we’ve had the Indy cars, it’s gotten better and better and better, and it’s because of the track seasoning in and guys zeroing in on the tires and aerodynamics and that type of stuff.”

Wallace says the inagural Iowa Corn Indy 250 in 2007 was a coming out party for the track and put it on the map as one of the first big events. He says it was hugely successful and the continues with the race Sunday that features the Indy 500 winner and a lot of other top name drivers.

Interest in open wheel racing waned in the mid 90s after the Indy Racing League and CART split up and Wallace says it is just now starting to recover. He says the televising of a lot of the races has raised interest and he says the new design of the car is “sexy” and gets people’s interest.

The racing begins this Saturday with IndyCar qualifying and a Firestone Indy Lights race.