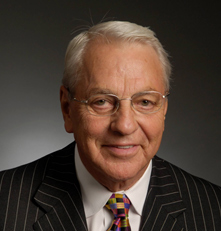 The founder of an Iowa-based convenience store chain has died.

In 1959 Bill Krause and his father-in-law went into business together, then in 1963 they began selling staples like milk, bread and eggs at their gas station in Hampton, Iowa — becoming pioneers of what is now known as a convenience store.

The enterprise grew into the Kum & Go convenience store chain, with more than 400 stores in 11 states.

Krause, who graduated from the University of Iowa, was the manager of the 1957 Hawkeye football team that won the Rose Bowl. He’s been a major benefactor for the university and had a variety of other business interests, including Liberty Bank.

Governor Terry Branstad issued a statement this afternoon, calling Krause “a great Iowa entrepreneur” who “always had a smile on his face” and “an upbeat attitude.”

Krause died this morning at his home in West Des Moines. He was 78.

According to the Kum & Go, the chain now has 4000 employees and serves 400,000 customers daily. It is the fifth-largest “privately-held, company-operated” convenience store chain in the U.S.