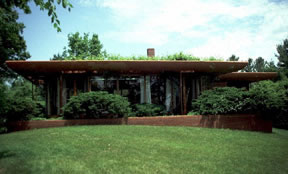 An event is scheduled this Saturday evening at the northeast Iowa home designed by a famous Chicago architect, to raise money for restoration of the boathouse on the property.

Frank Lloyd Wright designed “Cedar Rock” in 1950 as a retirement retreat for a couple who spent 31 summers there.

“What’s unique about it is the fact that the homeowners donated the house immediately after they were finished using it, so there were no homeowners in between — so what you see is basically what they got from Frank Lloyd Wright,” says Kathryn Hund, who has been giving tours of the property near Quasqueton, Iowa, for nearly seven years.

“When you step into the house it’s sort of like a time capsule to the 1950s when the Walters moved in.”

Wright not only designed the structure of the home, but he designed the furniture and chose the furnishings — right down to the china. The boathouse on the property is not typically open for tours, but Hund says it will be open this Saturday evening to folks who attend the fundraiser.

“There’s only a handful of Frank Lloyd Wright-designed boat houses still in existence in their original form,” Hund says. “The boathouse here was designed for the estate at the same time that Frank Lloyd Wright designed the rest of the property in 1950. It stands on the banks of the Wapsipinicon River.”

“There’s an enthusiasm for Wright architecture that you catch when you start going to them,” Hund says. “It’s pretty contagious.”

From 8 to 10 p.m. this Saturday, June 22, visitors at Cedar Rock will be able to stroll around the property and see the maid’s quarters on the estate, which is not open to regular tours. Organizers hope to raise $170,000 for the restoration work on the boathouse. The event is scheduled to fall as closely as possible to what’s called the Strawberry Moon — the full moon that falls in June during berry-picking season.