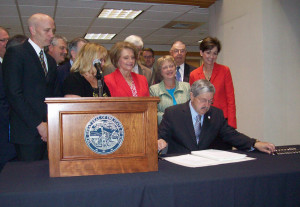 Governor Terry Branstad sat in the atrium of a Mason City health care clinic this morning as he signed a bill into law that outlines the new “Iowa Health and Wellness Program” for low-income Iowans.

It’s Iowa’s response to “ObamaCare’s” promise to give states federal money to expand Medicaid to cover more of the uninsured.

“A lot of people were very suspect that this could possibly happen,” Branstad said.

“However I’ve always believed that our work as leaders and legislators is all about the art of the possible and the willness to try to find a win-win situation, most important something that’s a win for our constituents — for the people of Iowa — and this bill does exactly that.”

Branstad invited two key legislators from the north central Iowa area who came up with the compromise, billed as something different from traditional Medicaid coverage. Senator Amanda Ragan, a Democrat from Mason City, told the crowd she is “proud” of this bipartisan work.

“Today we will codify our best effort with the signining of the Iowa Health and Wellness Plan,” Ragan said. “Ultimately an additional 150,000 of our fellow Iowans will be able to receive health care at reasonable and affordable cost through an improved care delivery system.”

House Republican Leader Linda Upmeyer of Clear Lake said it was a “challenge,” but by focusing on areas of agreement, she and Ragan were able to craft a compromise.

“This will promote wellness,” Upmeyer said. “We do see this as a better plan than simply expanding a decades-old and a bit archaeic system that we currently have.”

Iowans who get this new health care coverage will be required to get regular check ups and follow doctor’s orders — like losing weight or quitting smoking — or they’ll face penalties. It’s different enough from traditional Medicaid that federal officials will have to give the State of Iowa a waiver for the Iowa Health and Wellness Program. The governor argues it’s an “Iowa solution” to Medicaid expansion that will be mimiced by other states.

“I think up until the end of the session very few people believed this could really come together,” Branstad said, drawing laughter from the crowd, “and that we would actually get a bipartisan agreement and that we would have a bill signing of this magnitude, but it is a tribute to the hard work and perserverance and cooperative environment that we had.”

Over a dozen legislators from both parties attended the bill signing, plus health clinic workers and patients gathered in the atrium of the Mason City Clinic to watch.

The Iowa Health and Wellness Plan is included in an enormous bill that includes the budget outlines for the Departments of Human Services and Public Health. Branstad has item vetoed some spending proposals, but he has accepted a new requirement that he review all abortions for Medicaid patients in cases of rape, incest, to save the life of the mother or because of fetal deformity.

Branstad now has the authority to force hospitals that perform those abortions for Medicaid patients to pay for the cost rather than have state taxpayers pick up the bills.