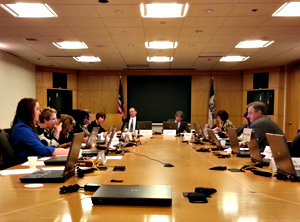 The news that Microsoft is behind what had been referred to as “Project Mountain” was delivered this morning at a meeting of the Iowa Economic Development Authority Board.

Board vice-chairman Robert Brownell says this could be the first of many expansions of the software giant’s data center in West Des Moines, which opened in early 2012.

“The total investment that Microsoft is making in Iowa data centers is roughly $1.25 billion and they’ve added a lot of good, quality jobs here in Iowa and they’ve incented a lot of good infrastructure build in Iowa,” Brownell says.

“Many of the organizations that come to Iowa for data centers are finding it a very viable place to be.” The IEDA Board approved $20 million in tax credits for the project. In addition to the Microsoft facility, Iowa houses data centers for Google in Council Bluffs and IBM in Dubuque. Facebook officials announced in April they plan to invest up to $1 billion for a data center in Altoona.

Debi Durham, director of the Iowa Economic Development Authority, hinted at today’s meeting that “there may be more to come.” Durham says Iowa has a lot to offer companies that operate large data centers.

“When you look at the legislation that Iowa put in place many years ago, creating this business climate that supports (data centers), and when you look at our infrastructure, such as the abundance of utilities that are reliable and less expensive than you find in many places in the United States…I think we have created the business culture that fosters this,” Durham said.