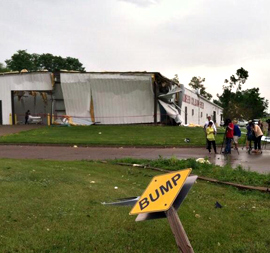 Body shop damaged by a storm in Muscatine.

This morning Governor Terry Branstad toured areas of eastern Iowa that have been hit by the strong storms that have swept through the state — and the governor told reporters the damage is worse than he expected.

“A lot of the businesses in this downtown area of Waukon have been hurt very bad,” Branstad said.

Residents in Waukon say about five inches of rain fell this weekend and flood waters were about waist deep in Waukon Sunday morning.

“It’s just devastating here in Waukon,” Branstad said. “You know this town is nowhere near a river, but obviously the flood damage here in downtown is huge. Also, many homes have backed up sewers and significant damage and a lot of this is not covered because it’s a flood, unfortunately.”

“We’re going to be asking for a federal designation on this and looking at what might be able to be done from FEMA or the SBA to try to help the homeowners and the businesses that have been so hard hit,” Branstad said. “And it’s not just here in Waukon, which was hit very hard, but also Lansing and the county has been hit very hard as well.”

Before he arrived in Waukon, Branstad stopped in Muscatine to tour businesses and a church that were damaged by a tornado on Monday.

“My heart really goes out to the people that have been so devastated,” Branstad said. “I want to say how impressed I am with all the volunteers and people that have pitched in to help. It’s a massive clean up and a lot has to be done, but a lot of people have already done a lot.”

An employee at a Muscatine auto body shop died when he was hit by debris from the tornado, which witnesses say touched down at about 3:30 Monday afternoon. Tornadoes also were spotted near Stanwood and Solon yesterday afternoon.

By Darin Swenson, KDEC, Decorah/Photo courtesy of the Governor’s office.