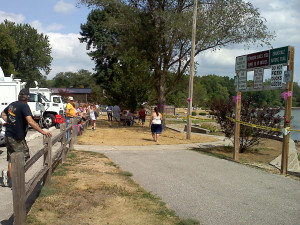 Searchers and others gathered at Meyers Lake in July of 2012 after the disappearance of Lyric Cook-Morrissey and Elizabeth Collins.

The parents of a northeast Iowa girl who disappeared along with her cousin last July are “somewhat hopeful” after learning of a new lead in the case.

Elizabeth Collins and Lyric Cook-Morrissey were last seen on July 13, 2012, riding their bicycles in Evansdale.

The girls’ bodies were found on December 5th in a wooded area of Bremer County, about 20 miles away from Meyer’s Lake – where their bikes and some personal belongings were found. No arrests have been made.

“We realized that we have three different people — two early-on and one just a couple months ago — that came forward with information that identified a white SUV-type vehicle,” Smock said. Each witness reported seeing an older, box-style SUV at three different locations near Meyer’s Lake on the day the girls went missing.

Elizabeth Collins’ father, Drew, is hoping the new information will lead to an arrest. “We were hoping for more information, you know, something more than this vehicle description. But we are just always waiting for the day to find out what really happened,” Collins said.

Heather Collins, Elizabeth’s mother, is urging anyone with any information to step forward. “We are already going on a year. We had really hoped to have found the person (who did) this,” Collins said. Police believe the vehicle in question may have looked like a Chevy Suburban, a Ford Bronco or something similar.

The public is urged to call Evansdale police (319-232-6682) or Cedar Valley Crime Stoppers (1-855-300-TIPS) with any information they may have. A $150,000 reward remains available for anyone who provides a tip that leads to an arrest and conviction.