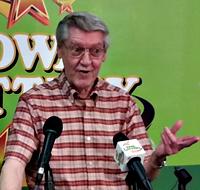 Don Johnson of Decorah talks about his Powerball win.

An 80-year-old Decorah man is the state’s newest millionaire. Don Johnson was at Iowa Lottery headquarters in Des Moines today to claim a $2 million prize from last Saturday’s Powerball drawing.

The lottery’s Mary Neubauer introduced Johnson at a news conference. Neubauer asked, “Can you tell the folks what your plans are for the winnings?” Johnson responded, “Oh yes, I’m going to spend it.”

Following a bit of laughter, Johnson noted his wife of nearly 50 years is in a nursing home, so the winnings will help pay for her care. Shirley Johnson was diagnosed with Alzheimer’s Disease several years ago.

The jackpot-winning ticket in Saturday’s $131.5 million Powerball drawing was sold in Pennsylvania, while the ticket sold in Decorah was the only one in the country that won a $2 million prize that night. 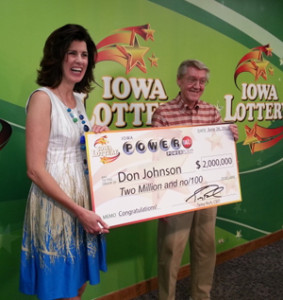 Johnson, who joked he’s “the original Don Johnson – not the actor,” is collecting $1.4 million after taxes. Johnson said he has no plans to buy anything extravagant.

“No, I’m not sure what I’ll do,” Johnson said. “I mainly want to get stuff for (my wife) done. That’s my main objective.”

Johnson, who traveled to Des Moines with his daughter, said his brother died a few years ago, but he has two sisters who are 96 and 93 years old.