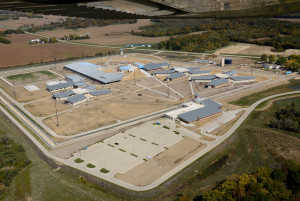 New prison under construction at Fort Madison. (click on image to enlarge)

A spokesperson for Iowa’s prison system insists a break in at the construction site of the new Iowa State Penitentiary in Fort Madison will not jeopardize security at the new facility.

The break in occurred one week ago, on June 19.

Some of the items stolen from construction trailers included blueprints for the new 800 bed, $117 million prison set to open next year.

The drawings were contained in software on laptop computers that were taken along with tools. Iowa Department of Corrections spokesperson Fred Scaletta doesn’t believe the theft will jeopardize security.

Scaletta rejects claims by the president of a union representing prison employees.

Danny Homan described the theft as “a major security breach that would threaten the safety of staff and the public for decades to come.” The construction site break in follows Monday’s discovery of an apparent escape attempt by one or more inmates.

Two ropes fashioned from bed sheets were found hidden in a cell house within the current Fort Madison prison. Security guards also found gloves and sandpaper with the ropes.