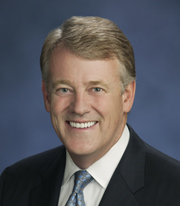 A retired businessman who moved back to Iowa after leaving his job as president of an energy company has taken a formal step toward launching a campaign for the U.S. Senate.

Fifty-one-year-old Mark Jacobs announced this afternoon that he has formed an “exploratory committee” and intends to travel Iowa for a while longer before deciding whether he will run for the senate.

“This came about with the work I’ve done with ‘Reaching Higher Iowa’ which is a non-profit organization I started in January to advocate for improved public education in the state and I’ve had the opportunity through ‘Reaching Higher Iowa’ to travel all over the state and meet a lot of great people and through the course of those travels I’ve had a number of people that have urged me to consider the U.S. Senate race in 2014,” Jacobs said during an interview with Radio Iowa.

Jacobs grew up in Des Moines and graduated from Roosevelt High School. He resigned about 18 months ago from his job at an energy company that went from near-bankruptcy to being ranked in the Fortune 500.

“Made the decision to move home. I’ve been teaching up at Iowa State in the business school which has been a terrific experience for me to try to bring a little bit of the real-life business experiences and give students a glimpse of that and I started ‘Reaching Higher Iowa’ in January of this year to advocate for improved public education,” Jacobs said.

Many Republicans say the federal Department of Education should be abolished and the federal government should have no say in how local schools are run. Jacobs told Radio Iowa education is “primarily a state issue” and if he decides to run for the U.S. Senate, he’ll come up with a transition plan for his non-profit focused on improving Iowa schools.

According to Forbes Magazine, Jacobs was paid $9.9 million in 2011 for his work leading the Houston-based energy company and Sam Clovis — one of the Republicans who has already launched a bid for the U.S. Senate — has suggested the Republican Party “establishment” is pushing Jacobs to run. Jacobs said he’s “not big on labels.”

“I have approached everything I have done with good old-fashioned Iowa values and common sense business principles,” Jacobs said, “and one of the things I learned over the course of my business career that in order to solve problems you need to understand the root cause and you need to listen to people at a grassroots level.”

Jacobs plans to speak with politicians like Wisconsin Senator Ron Johnson who’ve made the transition from the business world to politics.

“Washington, in my view, is very dysfunctional,” Jacobs said. “…One of the things that we do need to do is get people in Washington who are consensus builders, that know how to listen and know how to get things done.”

Jacobs, who lives in West Des Moines, described himself as a “life-long Republican” who can take “common sense” to Washington.

Four other Republicans have begun their campaigns for the GOP’s 2014 U.S. Senate nomination and a few more Republicans are still pondering the idea of running for the Senate. Congressman Bruce Braley is the only Democratic candidate for the seat. Democrat Tom Harkin announced this past January that he would not seek reelection to the U.S. Senate in 2014.