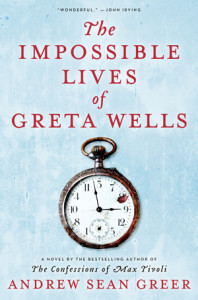 A novelist with two bestsellers already on the shelves will be in eastern Iowa today to promote his latest book.

It’s something of a homecoming for Andrew Sean Greer as the northern Californian taught two semesters at the University of Iowa’s writer’s workshop. Greer’s new work is called, “The Impossible Lives of Greta Wells.”

“It’s a book about a woman who wakes up every morning in a different version of her life, a sort of alternate universe, where everything is the same except the year is different,” Greer says.

“Her husband and her brother and her aunt are all the same age and in the same place, but how does the time in which they live change all of their limitations and possibilities?”

Greer hesitates to call it a time travel premise, as he says it’s more than that. The 42-year-old says he’s nearing middle age and is beginning to ask himself about how his life could have been radically different, but for a few changes in earlier years.

“I have the great luck of having an identical twin who lives next door to me who has, I guess, an alternative life, which is that he’s married with two children,” Greer says. “So I get to see if I’d been a dad, what that would be like, which looks pretty fun.”

“For one thing, I’ve never been there in summer. I’ve only taught there in winter and left just as it was getting warm and things were blooming. I can’t wait to see it in its full splendor,” Greer says, laughing. “This is sort of like a golden moment to get to return to Iowa and prove to my students I really am a novelist.”

His two earlier books were both bestsellers: “The Confessions of Max Tivoli” and “The Story of a Marriage.” Greer will do a reading from his new book and answer questions at 7 P-M at Prairie Lights Bookstore in downtown Iowa City.