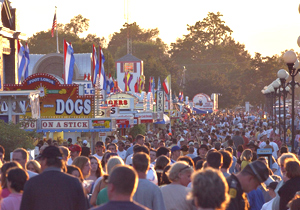 The Iowa State Fair, once again this year, will feature some unusual new food items.

The fair, scheduled for August 8-18 in Des Moines, will include 200 food stands and 57 foods on-a-stick. Fair spokesperson Lori Chappel says one of the new additions this year is the Shrimp Corndog.

“It is three large, fresh shrimp dipped in corndog batter and then it’s deep fried and comes with a jalapeno glaze. It looks very much like a corndog, but when you bite into it, you’re going to get delicious shrimp instead,” Chappel says. If fairgoers are looking for a healthier option, they can try a Smoothie On-a-Stick.

“It’s just that – a strawberry smoothie that’s simply frozen and put on a stick. So, it’s very mobile. Of course, on a hot August day you might want to eat it rather quickly, but it’s one of our healthier options,” Chappel says.

Some of the other new food items that will be available at the State Fair include Bacon Wrapped Riblet On-a-stick, Fried Brownie On-a-stick, and a Sweet Corn Corndog, which is a hot dog dipped in batter enriched with fried sweet corn.

More new 2013 fair foods will be announced in early July.