You are here: Home / Education / Crocodile named for Iowa professor 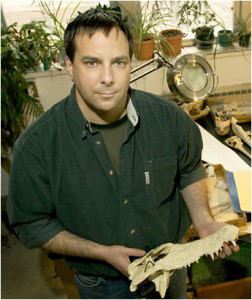 A species of crocodiles that lived millions of years ago now bears the name of a University of Iowa professor who is known as an expert on crocodiles.

Chris Brochu, a professor in the University of Iowa’s Department of Earth and Environmental Sciences, says crocodiles are “fascinating creatures.”

“I think they’re a lot more sophisticated than people give them credit for,” Brochu says. Brochu and his students are trying to reconstruct the family trees of crocodiles, including extinct crocs that lived in Africa millions of years ago.

“This animal lived alongside human ancestors,” Brochu says. “That’s something that people don’t often appreciate. When they visualize early humans and early human ancestors they think of them as running away from lions or hyennas or leopards. Actually, their primary predators may have been crocodiles because our ancestors, just like we do, have to drink water or had to drink water, and going to any body of water back then would have been a gamble.”

“It would have had an even more snaggle-toothed appearance than most other crocodiles it’s related to,” Brochu says. “Its closest living relative is the African Dwarf crocodile…A dwarf croc never gets bigger than about six feet.”

In May of 2012 Brochu published an article in an academic magazine detailing his discovery of another ancient crocodile that was at least 27 feet long. He named that creature for a fellow researcher who died of malaria several years ago.

Brochu admits he doesn’t really know what originally triggered his interest in crocodiles, but he’s been studying them for more than 20 years.