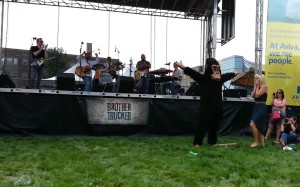 Iowa rock band Brother Trucker was playing the Arts Festival’s main stage when someone in a monkey costume starting wandering through the crowd. The monkey, between songs, made it to the stage and handed a note to singer Andy Fleming.

The note, which Fleming read aloud, explained the man was wearing the monkey suit because he was proposing to the “love of his life of 31 years.” The man in the suit was soon on one knee, proposing to a woman who was nearby with friends. She said “yes.” 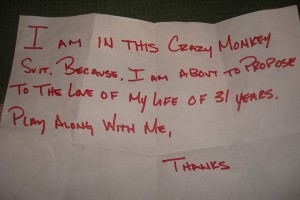 The monkey man, 48-year-old Darin Davis, and 47-year-old Melissa Hall-Rodriguez are now engaged to married. “When I saw the monkey come out, I thought he was selling something because he was showing a sign to people in the crowd,” Melissa said.

The two were high school sweethearts. Both graduated from South Tama High School. But, Darin left Iowa in 1983 to pursue a music career. He was living in Ohio when he reconnected with Melissa on Facebook just over a year ago. She had just left Florida and returned to Iowa to be near family. Darin decided to do the same and the romance was rekindled.

Melissa actually first proposed to Darin five months ago by way of a video her 15-year-old son produced and posted to YouTube. She then challenged Darin to surprise her with a proposal. “She knew that I went out and bought a ring, but she didn’t know when she was going to get it,” Darin said. “She said that I had to trump her proposal in order for this thing to work, so I had to come up with something better.”

So, why the monkey suit? “I went to a costume shop and I just said ‘what’s the most ridiculous character we can come up with?’ There was one other idea I was vacillating – which was the knight in shining armor. But, I thought no, that’ll give it away too soon. So, I played the monkey card,” Darin said.

The monkey suit marriage proposal fell on the couple’s 31st anniversary of their first date, which was June 30, 1982. Melissa said she’d like to hold their wedding on June 30, 2014.