You are here: Home / Fires/Accidents/Disasters / Century old barn may’ve been started on fire by flaming raccoon 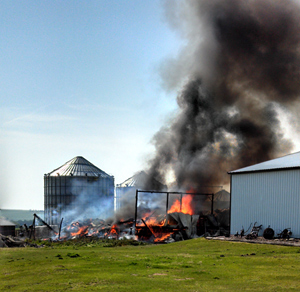 A barn that was more than century old was reduced to rubble in less than an hour this morning near Atlantic and may have been started by a flaming raccoon.

Firefighters from Atlantic and Marne were called to the fire at Indian Creek Farms at 57202 Indian Creek Street, at around 9:15 A.M.

Cats near the fire were on the prowl for mice escaping the blaze, and it’s possible, according to Redinbaugh, that a raccoon living in the debris caught on fire and ran to the barn, catching it on fire.

Cass County Emergency Management Coordinator Mike Kennon speculated that embers from the burn pile may have caused the blaze, but he acknowledged the winds weren’t very strong at the time the burn pile was ignited. The barn and its contents were a total loss.

Redinbaugh said they were using the wood framed and metal coated structure as a storage facility. He said hay racks, saddles, a dozen new drive tires for trucks were inside, along with antiques, which were stored in the upper floor haymow.