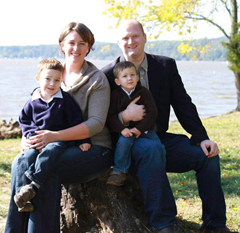 Jim Mowrer and his family.

A 27-year-old Boone native has quit his job at the Pentagon to run for the Iowa congressional seat Republican Steve King now holds.

Democrat Jim Mowrer is formally kicking off his campaign this morning.

“After high school I joined the Iowa National Guard because I think a lot of Iowans and Americans of my generation wanted to serve after 9/11…and I had a history of service in my family,” Mowrer said during an interview with Radio Iowa.

“Both my grandfathers served in World War II, came back to Iowa and lived the rest of thier lives here.”

Mowrer served in the Iowa National Guard unit that spent 23 months in Iraq — the longest Iraq deployment for any unit in the military. In 2009 he returned to Iraq as a private contractor.

In 2010 Mowrer went to work at the Penaton as a special assistant to the Under Secretary of the Army. “The work that I did there was on making the Army and our defense more efficient and effective and saving taxpayer dollars and ensuring that we have the strongest Army the world has ever seen,” Mowrer said, “so I’m running for congress because I saw firsthand the problems and the damages that a broken congress can cause and I want to be a part of the solution.” 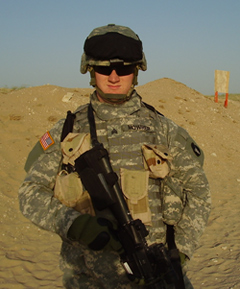 According to Mowrer, too many politicians in Washington from both parties are “pushing sound bytes to…score political points for partisan gain.”

“Democrats and Republicans need to work together to get things done,” Mowrer said. “Regardless of party, people on extremes on both sides need to come to the table to find common sense solutions to make sure they protect middle class families like the one I grew up in.”

Mowrer accuses King of being part of the problem.

“Steve King isn’t working for Iowans. He’s not working for the 4th district and I have a record of actually getting things done,” Mowrer said.

“I think that a lot of politicians spend time talking about problems, but not actually working on finding a way to find solutions and getting them done.”

Mowrer’s last day at the Pentagon was June 10. He has moved back to Boone with his wife — who is a Boone native, too — and their two young children.

If elected, Mowrer would be among the youngest members of congress. To be eligible to serve in the U.S. House of Representatives, a candidate must be at least 25 years old and a resident of the state they wish to represent.

Photos provided by the Mowrer campaign.