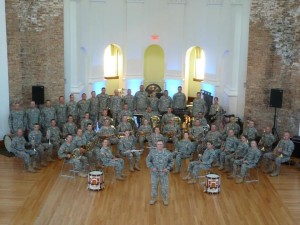 More than 200 members of the Iowa National Guard are spending the holiday stationed abroad. Around 160 are in Afghanistan, 40 are in Honduras, and small group of soldiers arrived this week in Kosovo, to help that country’s national security force create a band.

Guard spokesman Colonel Greg Hapgood says a brass quintet from the 34th Army Band in Fairfield is spending 10 days in Kosovo. “The Kosovo security force has created their own band and they’ve asked Iowa to assist them in getting their band stood up, to create their band and how bands work and how to be a success,” Hapgood says.

The quintet consists of two trumpets, a French horn, tuba and trombone. “The Iowa soldiers will be working on things like drill and ceremony, which is part of marching band. They will also work on small groups, whether it’s quintets or quartets, or whatever those groups are that can go out in the communities,” Hapgood says. “So, really a wide variety of tasks will be worked on during this mission.”

The training mission follows a visit to Des Moines by Kosovo’s Prime Minister, when a sister-state relationship was formalized between Iowa and Kosovo. The quintet returns home next week, in plenty of time for the full band’s next concert, when RAGBRAI pulls into Fairfield on July 26.