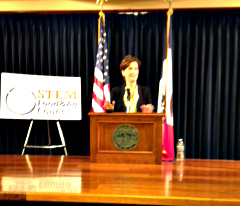 Lieutenant Governor Kim Reynolds today said she and Governor Branstad have an “ambitious schedule” and the state troopers who drive them around the state sometimes have to speed to make up time.

“Even…with this great job our scheduler does, it’s sometimes hard to leave these events and you run behind,” Reynolds said during a statehouse news conference.

Last week, the Iowa Department of Public Safety released the details of an incident in late April in which Branstad and Reynolds were in a vehicle being driven by a state trooper that was clocked going 84 miles an hour on Highway 20, where the posted speed limit is 65.

Reynolds said the situation was “not normal,” but she was not aware of the speed or of another trooper giving chase to the SUV  in which she and the governor were riding.

“Eighty-four miles an hour, you know, that’s a high speed and we want to make every effort to stay within the confines of the law and not speed and so we’re going to continue to look at the schedule,” Reynolds said. “It’s being reviewed by the Iowa Department of Public Safety.”

Reynolds is “not even sure” what event she and the governor were speeding to attend on April 26.

“Honestly, when we get in the vehicle our schedules are so back-to-back-to-back, it is an opportunity for me to get on my phone or my iPad,” Reynolds said. “I’m either making calls; I’m reviewing emails; I’m responding; I’m reading information; a lot of times we personally sign the thousands — hundreds of thousands of certificates that we give to individuals every year.”

Reynolds defends the state troopers who are part of the special security detail assigned to drive the governor and lieutenant governor.

“I’m not watching the speedometer,” Reynolds said. “I have full faith and confidence in the troopers that are transporting us all over the state and so I’m busy doing the work that I need to be doing.”

In 1954, Iowa Governor Bill Beardsley died two miles north of Des Moines when the car he was driving smashed into the rear of a pickup truck. For decades since, Iowa governors have been driven around the state by state troopers. Once lieutenant governors began serving as the governor’s running mate in 1994, troopers began driving Iowa’s lieutenant governors, but in this instance both Branstad and Reynolds were in the same black SUV.

“We want to do everything that we can to make sure that we not only protect the safety of the governor and myself, but the public and I believe that’s what our law enforcement officials are doing,” Reynolds said. “They’re trained professionals. They do a phenomenal job. They place their lives on the line every day to protect all of us and so I have great confidence in their ability to do that.”

An agent who works for the Division of Criminal Investigation was the person who first called dispatchers to report a black SUV was speeding along Highway 20. He was placed on administrative leave a few days later. Reynolds said “the two incidences are absolutely not related.” Beyond the speeding report, Reynolds did not reveal what the other incident involving the agent was.

Reynolds made her remarks during the weekly news conference held in the governor’s office. The governor is traveling in Europe.

AUDIO of Reynolds speaking with reporters, 17:00