You are here: Home / Crime / Courts / Shepard family calling on legislators to enact “one strike” law 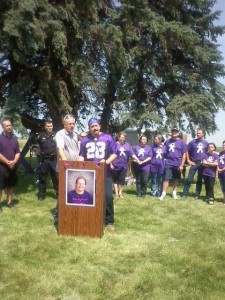 The parents of Kathlynn Shepard are joining with a nonprofit group to push for tougher penalties in Iowa for sex offenders who target children.

Kathlynn Shepard, a 15-year-old from Dayton, was abducted along with a 12-year-old girl on May 19. The 12-year-old escaped, while Shepard’s body was found weeks later in the Des Moines River.

The man alleged to have kidnapped and killed Shepard, 42-year-old Michael Klunder, took his own life hours after the kidnapping.

Klunder was released from prison in 2011 after serving less than half of a 41-year sentence for convictions related to two kidnappings in 1991.

Kathlynn’s father, Michael Shepard, spoke about his daughter at a press conference Saturday in Dayton. “We’re going to take her songs and her hopes straight to the elected officials of Iowa and demand better protection for our children,” Shepard said.

The press conference was held under the “Tree of Hope,” named in memory of Kathlynn. Many people in attendance wore purple, Kathlynn’s favorite color. “If we can help protect just one child in Iowa or the nation, then this tragedy, as bad as it was, can mean something,” Shepard said.

Joining Shepard at the press conference was Brent King. His family formed the Chelsea’s Light Foundation. The foundation pushed legislation in California to ensure those who commit violent crimes against children are put behind bars for life. “It’s a one-strike law that does not give the ability for release,” King explained. “One and you’re done…we don’t need to have a second victim.”

Chelsea’s Law, passed in California in 2010, is named for King’s 17-year-old daughter who was raped and killed in a San Diego park by a paroled sex offender. King said Chelsea’s Light Foundation will provide legal and financial help to the Shepard family as they prepare a bill to present to the Iowa legislature.

Governor Branstad and key lawmakers have said they are open to considering sentencing changes in the wake of Kathlynn’s death.