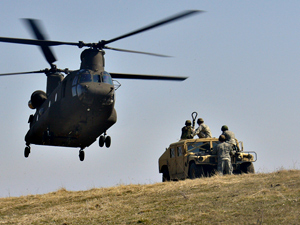 The Iowa Army National Guard is upgrading its Chinook helicopters to a newer model.

The Iowa National Guard is showing off two new models of helicopters today at its Army Aviation Support Facility in Davenport.

Facility commander, Lieutenant Colonel Jamie Dailey, says one of the new models is an upgrade of the large two-rotor Chinook helicopter.

“The significant difference is in the cockpit. It’s a glass cockpit, it’s a digital cockpit with computerized capability — system of systems if you will,” Dailey says.

“The aviators can program the aircraft. It’s quite capable of flying itself, ” Dailey says.

The new version of the Chinook, known as the CH-47F, required the entire crew on the ground and in the air to go through training.

There are now five of the new model Chinooks in Davenport and there will be one more added.

The other helicopter, the UH-72A Lakota is brand new to the Iowa Guard.

“It was not developed for the military, it is an existing civilian helicopter used for a variety of purposes from medevac to law enforcement, to transport. The military bought the aircraft, painted it green and we made it part of our aircraft because it fit into our mission set of our security support battalion,” Dailey explains.

The Lakota is also an upgrade in technology from what the unit has been using. “It replaces the outdated and obsolete OH-58, the OH-58 Kiowa has been flying since the 60’s. It’s just a small aircraft, and so this is larger, more capable, faster, with a lot more technological improvements,” Dailey says.

There are four of the Lakotas, with two in Davenport and two in Waterloo. Dailey says the two types of helicopters gives the Guard different options in its support missions.

“The Chinook is a heavy helicopter capable of 10-ton swing loads, 33 passengers. It can conduct air assault and air movement and can work well with the rest of the National Guard to augment their training plans,” Dailey says. “The U-H-72…can carry up to nine passengers. It can work homeland security, homeland defense, state emergency missions, flood response, tornado response.”

The Iowa National Guard is showing off the new helicopters to the public today from 5 to 7 p.m. at the facility in Davenport.