You are here: Home / Fires/Accidents/Disasters / Hospital says it’s the first to send out blood products with its helicopter 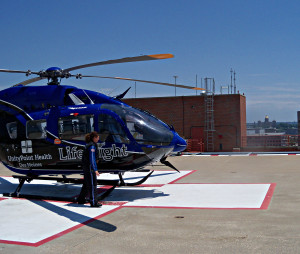 Life Flight helicopter on the helipad. You can see the state capitol at the lower right. (click on image to make larger)

A Des Moines hospital is now putting units of blood and plasma on every flight of its rescue helicopter.

“Often we would see patients that needed either product or both, and it was not readily available at referring facilities, or ready in a time-efficient manner. Or we would do scene flights where obviously there no resources out on the highway, we have to bring the resources to them,” Zweigart says.

He talked about the move while standing on the rooftop landing deck — saying it’s a groundbreaking move for the state. “We’ll be the only aircraft in Iowa carrying the blood products on every mission,” Zweigart says.

“Other aircraft may have the capabilities of doing it as needed. We’re going to be able to provide them every mission — have it available with us — so if we get somewhere and recognize it is needed, we already have it with us.”

Trauma surgeon, Richard Sidwell, says the blood products will give patients a better chance to get back to the hospital where he can treat them.

“And so, if that can start at the scene, then that gives them a head start on the care that they would receive at the hospital.” It seems like a simple idea to add the blood products to the helicopters, but Sidwell says it is part of the evolution in treatment of trauma patients.

“That’s one of the lessons that we’ve learned in trauma care over the last 10 years — is how important it is for the severely injured people to get that blood and clotting factor early. And so, it’s really only the last couple of years that it’s been something that we’ve focused on in the hospital,” Sidwell says.

“So, it’s really taking the cutting edge care from the hospital and pushing it into the pre-hospital environment.” There is more to adding the blood to the flights than just loading it into the copter. 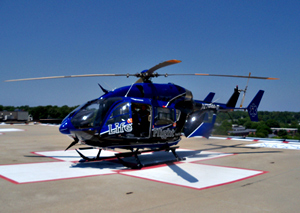 “It has to be kept stored properly…blood and blood products have a shelf life. And that’s all part of the program, sorting out the policies and the procedures. And we have to conform to all of the blood bank policies, so it’s just the same in the pre-hospital environment as it is in the hospital environment,” Sidwell explains.

Zweigart had to work out some of the details to transport the blood products.

“There was actually a lot that went into it, it’s a very highly regulated aspect. We’re actually going to become an extension of the blood bank of Methodist Medical Center,” Zweigart says.

“So we have a fridge and freezer on our helipad now that are exactly like the ones that they have in the blood bank. And we will have the units available to walk right out the door with us.”

Iowa Methodist’s helicopter covers roughly one third of Iowa’s counties. Zweigart says there are a few other helicopter services in the midwest that provide the blood products on each call, and he expects that to eventually become the standard practice.