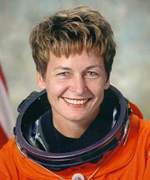 Southern Iowa native and astronaut Peggy Whitson visited Marion over the weekend as part of an event celebrating the contributions Iowans have made to space exploration. Whitson logged 377 days in space and says she’s anxious to go back.

“I still find it completely amazing that a farmer’s daughter from Iowa can go up and become commander on the International Space Station,” Whitson says.

One of Whitson’s memories is of meeting the University of Iowa’s James Van Allen, a physicist who served as principal investigator for 24 space missions. At the time, Whitson was in high school with dreams of becoming an astronaut, but Van Allen recommended otherwise.

“He told me, ‘You don’t need to become an astronaut, it’ll all be done robotically. There won’t be any manned missions, this is just a phase we’re going through,'” Whitson says. “Luckily, I didn’t actually listen to that advice.” Whitson, who grew up near Beaconsfield, holds the women’s record for most hours in space.

Collins Radio, which later became Rockwell Collins in Cedar Rapids, supplied communications technology for the Apollo missions. For Jim Westcot, the project’s deputy director, the memories are still sharp. He says the difficulty was getting equipment small enough to fit in the capsule’s cockpit and to make sure everything would work, leaving nothing to chance.

“They tried not to have brand new stuff that they didn’t know about, because that was not tested and we could have a failure,” Westcot says. “We had one unit that had four paths through it. Three things could go wrong in that thing and it still would work.”

The space exhibit comes from the private collection of local historian David Wendell. It will be housed at a senior living community north of Cedar Rapids for the next two weeks.