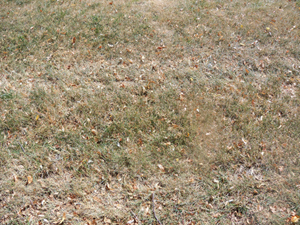 What’s being called a “Flash Drought” has turned grass that was lush and green in June into something that’s now brown and dry.

Parts of Iowa are seeing the driest July in decades and Jim Lee, a meteorologist at the National Weather Service, says the term “flash drought” applies, as the heat wave came on very quickly following Iowa’s wettest-ever spring.

“A drought can be characterized by a lack of rainfall, low levels of ground water and soil moisture, affects on plants and so forth and sometimes droughts occur over long time scales of several years, sometimes the occur over a period of a few months,” Lee says.

“So for the shorter events, sometimes we refer to them as flash droughts.”

Lawns that aren’t being watered are becoming brown and crunchy, especially in parts of central Iowa, where it’s the driest July, so far, since 1976.

Des Moines has only gotten six-hundredths of an inch of rain this month. Lee notes, the turnaround from earlier this year is unusual.

“We did have the wettest spring on record in Iowa in terms of the average statewide rainfall from March through May,” Lee says. “We’re not necessarily in a drought yet, in fact, very little of Iowa is in drought conditions right now, however, if we continue to see the dry pattern that we’ve seen established over the last couple of weeks persist through the rest of July, then we could enter that territory.”

Much of the state and a large portion of the region were hit with a drought that lasted the majority of last year, however, the rainy spring gave promise to a change for Iowa. Lee says it’s still not known whether this flash drought will become another full-fledged drought.

Lee says, “The fortunate thing about events like this is that because we had that wet spring, we were able to replenish our soil moisture, subsoil moisture, river levels, reservoirs and so forth, so that we’re better able to take a drier second half of summer.”

The forecast calls for a few scattered showers but no significant rainfall until perhaps the weekend.