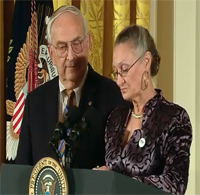 An Iowa couple was honored at the White House early this afternoon by President Obama and former President George H.W. Bush.

The 89-year-old Bush established a “Daily Point of Light” award in 1990 to recognize volunteers around the country and Obama invited the former president to the White House to present “Point of Light” number 5,000.

Floyd Hammer and Kathy Hamilton of Union, Iowa, were recognized for establishing a non-profit group that now helps feed hungry children in 15 countries.

“After being in business for 34 years, Floyd was dreaming of relaxing, even sailing around the world,” Kathy Hamilton said. “But in 2003 he was asked to build an AIDS hospice at an old leprosy hospital in Tanzania and that changed everything.”

Hamilton and her husband created the group called “Outreach” as a response to what they witnessed in Tanzania. 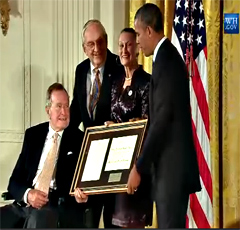 Fromer President Bush and President Obama with Floyd Hammer and Kathy Hamilton at the Points of Light ceremony.

“We saw children dying of starvation. There was no food and no money,” she said. “Three little boys who were scavenging for food ate something which was poisonous and they died. We left for home overwhelmed by the need and by our need to do something about it.”

The couple’s first effort with volunteers in their small town of Union, Iowa, yielded 2,000 meals.

“Each Labor Day volunteers all over Iowa help pack four million meals and in the United States and Canada tens of thousands of volunteers of all ages and nationalities have so far helped us to pack a total of 232 million meals — so far,” Hamilton said, with a laugh and the crowd gathered in the East Room of the White House applauded.

As recipients of the “Daily Point of Light” award, the Iowa couple are hailed as “civic heroes” because of their volunteer work.

“As we’ve seen time and time again, when people give of themselves — when they share the burden and they share the task of solving it — life shines, love grows all over the world and here at home,” Hamilton said. “Thank you so much.”

The award they won today was established by the 41st president after his 1989 inaugural address referenced “a thousand points of light” — to inspire volunteer efforts. The elder Bush spoke very briefly, thanking President Obama for the “hospitality” today at the White House. Obama praised Bush as a “gentleman” who has inspired “tens of millions” to volunteer and make the country “a force for good” in the world.