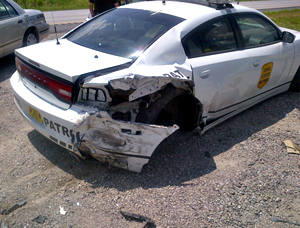 The Iowa State Patrol released this photo of one its cars involved in a wreck Tuesday.

Trooper Cody Kammeyer was sitting in his patrol car in the median of I-80, running radar to catch speeders, when a car going west on I-80 slammed into back of his patrol car.

Twenty-three-year-old Daniel McFall of West Des Moines has been charged with drunk driving, reckless driving and improper use of lanes. The trooper was taken to a hospital, treated for his injuries and discharged.

Another trooper on his way to the scene of the wreck was hit by another driver in Cedar Rapids. That trooper wasn’t injured and the other driver wasn’t ticketed.

The chief of the Iowa State Patrol has issued a written statement, though, pleading with drivers to be the look-out for police and emergency vehicles. So far this year in the United States, 20 law enforcement officers have been killed in some sort of traffic accident.