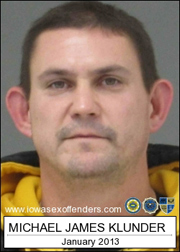 Photo of Michael Klunder from the state sex offender registry.

Legislative leaders are asking the state’s Public Safety Advisory Board to review the case of Michael Klunder, the man who authorities say killed himself after kidnapping two teenagers in Dayton on May 20.

In 1992 Klunder was sentenced to 41 years in prison for kidnapping, but he was awarded time off for good behavior behind bars and released in 2011. House Speaker Kraig Paulsen of Hiawatha says he and other leaders considered appointing a group of legislators to study the case.

“We looked at whether or not we wanted to do an interim committee on our own or whether we would plug into a board that already exists. It seemed to make sense to plug into that board, but do it in a formal fashion, so that’s what we’re going to do,” Paulsen says. “Obviously the safety of Iowa’s children is extremely important to the legislature.”

Fifteen-year-old Kathlynn Shepard and a 12-year-old girl were kidnapped in Dayton after they got off a school bus on May 20. The 12-year-old escaped. Shepard’s body was found a few weeks later in the Des Moines River. Her family is calling on legislators to pass a law that would keep those convicted of crimes against children behind bars forever.

Paulsen and other legislative leaders have written a letter to the state Public Safety Advisory Board, asking it to make recommendations about the sentences for individuals convicted of crimes against children.

“We want to make sure some of the actions we’ve taken in years’ past are adequately protecting Iowa’s children and we think this is one of the ways to look at that,” Paulsen says.

The draft of the Legislative Council’s letter to the Public Safety Advisory Board is below.

Re:  Request for Recommendations Relating to Current Sentencing Provisions Regarding Crimes Against Children (Klunder case)

Chairperson Ferguson and Members of the Board:

Pursuant to Iowa Code 216A.133A, this letter is a request from the Legislative Council to the Public Safety Advisory Board to provide recommendations to the Legislature relating to crimes against children.  With the recent kidnapping of two girls that resulted in the tragic murder of Kathlynn Shepard, the Legislature would like to take appropriate action to help protect Iowa’s children.    We are aware that since Michael Klunder was sentenced in 1992 there have been numerous changes in Iowa’s criminal law, including many penalty enhancements.   Specifically, we are asking that you provide information regarding what changes have occurred and whether any of those changes could have impacted any aspect of Klunder’s sentencing.  In addition, we are looking for specific legislative proposals relating to crimes against children that would help avoid someone like Klunder having the opportunity to commit more heinous crimes against our children.

The diverse makeup of the Public Safety Advisory Board, along with the assistance of CJJP staff and your statutory charge to “provide the general assembly with an analysis of current and proposed criminal provisions”, and to “review and make recommendations relating to current sentencing provisions” will help us in our efforts to address potential “cracks” in our criminal justice system.