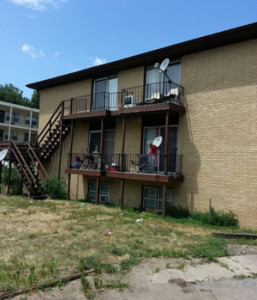 A Des Moines toddler is in critical condition after falling from the balcony of this apartment.

A Des Moines toddler is hospitalized in critical condition after a 20 to 30 foot fall from a balcony.

“The mother called us because her six-year-old son had seen her one-year-old son fall off the balcony,” Halifax said. The mother said she was in the apartment at the time using her cell phone.

According to a police report, the child had been standing on a chair on the balcony when he slipped and fell. The child landed in a grassy area. He’s being treated at Blank Children’s Hospital in Des Moines.

Halifax said the boy was still listed in critical condition today. The one-year-old child is identified as Darus Gaye. His mother is 22-year-old Diamond Gaye.