You are here: Home / News / Poll finds majority of Iowans like Governor Branstad, but shows warning signs about longevity in office 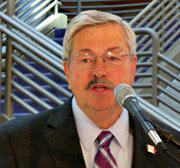 A poll conducted this week shows a majority of Iowa voters like Governor Terry Branstad, but 54 percent of those surveyed said Branstad has been in office long enough.

The Quinnipiac University poll was conducted on Monday, Tuesday and Wednesday of this week. Peter Brown is the assistant director of the university’s Polling Institute.

“Iowans like him and respect him. He’s 50 percent or higher in terms of job approval and favorability and that’s very good,” he says. “The downside for Mr. Branstad, should he seek reelection, is that there are a significant number of Iowans who think he’s been in the job too long, so the question for Governor Branstad is whether these people who think he’s been there too long will in the end vote for him anyway.”

While a majority said Branstad had been in office too long, 58 percent said his longevity in office won’t influence their vote if he does run in 2014. Branstad served 16 years as governor, from January of 1983 ’til January of 1999, then in 2010 he won a fifth term. He’s hired staff and raised over $2 million for a 2014 reelection bid.

“Roughly one in five Republicans indicates they think he’s been there too long, but it’s hard to imagine that most of them won’t vote for him anyway if he runs against a Democrat. That’s just the way voting behavior shakes out,” Brown says. “It is easier to say you’re concerned about someone being there for that reason than necessarily voting against them for that reason.”

Brown notes nine out of 10 voters don’t know enough about Jack Hatch and Tyler Olson, two Democrats who are running for governor, to even have an opinion. Senate Democratic Leader Mike Gronstal has said he’s considering a run for governor. He’s slightly better known, but only slightly, as eight out of 10 voters have no opinion of him either.

The Quinnipiac University poll found 46 percent of Iowans have a favorable view of the state legislature. That’s a higher rating than in any of the other eight states in which the university conducts surveys.