You are here: Home / Agriculture / Vilsack warns against another extension of current Farm Bill (AUDIO) 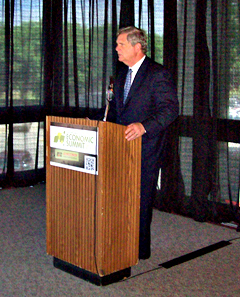 “Honestly, an extension removes an impetus for getting a Farm Bill done and the challenge and the risk of not getting it done this year is that you’re not likely to get it done in an election year, as we saw in 2012,” Vilsack said during a news conference in Ames, Iowa.

The U.S. Senate has passed its own version of the Farm Bill, but the House split the bill in two and has only passed one part. Vilsack said he’s not sure what path the House intends to take.

“I’m not sure whether what they’ve done up to now is for real or for show,” Vilsack told reporters.

House leaders have said they’re not ready yet to begin negotiating with senators to find a compromise until the other half of the Farm Bill — the part that deals with federal food and nutrition programs — passes the House.

“It does raise the concern that what’s happened up to this point is not necessarily going to lead to a Farm Bill and I think time’s running out to get it done by September 30,” Vilsack said.

Without a new, five-year Farm Bill, Vilsack says there’s no disaster assistance for livestock producers, no assistance for beginning farmers, no reform of commodity programs and “no savings to speak of” for taxpayers. Vilsack delivered a luncheon speech at the Iowa Farm Bureau’s “Economic Summit” today and spoke with reporters afterwards.