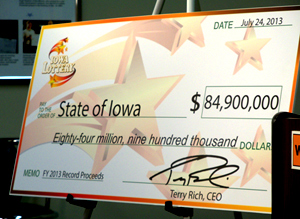 The Iowa Lottery displayed this check to represent the profit from the last fiscal year.

The head of the Iowa Lottery said today the lottery generated a record pay out to players and return of dollars to the state.

“For the first time in Iowa Lottery history, players have received over $200-million in this fiscal year, and the state of Iowa causes topped over $84.9. This was an incredible year for the Iowa Lottery,” according to Iowa Lottery CEO Terry Rich.

Rich says they are selling 10 to 15-percent less Powerball tickets. “But obviously, twice the dollar value in those tickets, so you actually make more money when it’s all said and done. And by covering less numbers, there’s less of a chance the jackpot will be hit,” Rich says.

Scratch tickets have been the leading seller among lottery products and Rich says they’ve found offering a variety of different valued tickets has been popular with customers. He says they started with a one dollar ticket and were worried that people wouldn’t buy a $2 ticket, but they did and they went to a $5 and then a $10 ticket and still sold tickets.

“We just has the most successful launch of a scratch ticket at 20-dollars in the history of the Iowa lottery,” Rich says. “In January we launched the Gamebook at 20-dollars and we bought what we thought were two years worth of scratch tickets and we actually sold out in four months.”

Rich says word of mouth about games has pushed up sales as jackpots grew and new games were introduced. The increase in sales comes as they’ve spent less money on marketing.

Rich says they are allowed by law to spend up to 4-percent of their revenue on marketing, and three years ago during the economic downturn they were spending 3.1-percent and had held to around 3-percent until last year when they spent 1.9-percent on marketing.

“So we really vary on what we’re trying to do on reaching our goals,” he says. Rich says Iowa ranks about fourth of fifth among states for total growth in lottery sales.

“We’re in the eight percent range, most are in the zero to three or four percent, so we’re ranking higher than normal,” Rich says. He says the business is very cyclical. “Right now we’ve raised the tide up for people to enjoy and play the Iowa Lottery, but I see that next year we could be ever down a bit –it depends on if we have the jackpots,” according to Rich.

He says they set a mark of making 60-million dollars because that was the best ever when they had our 25-year anniversary. It is the fourth straight year the Iowa Lottery has had increased sales. Rich says the organization’s research shows about 70-percent of Iowans play lottery games.

Here is a year-to-year comparison from the Iowa Lottery of annual sales by product: