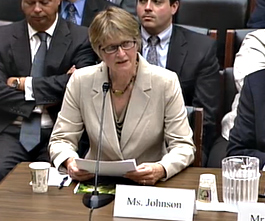 An Iowan testified today before a U.S. House panel that’s weighing the impact of the Renewable Fuels Standard (RFS) on the nation’s energy sector. Pam Johnson is president of the National Corn Growers Association.

“In 2012, the RFS supported more than 300,000 jobs, displaced 465 million barrels of imported oil, and lowered gas prices by at least 89 cents per gallon. It spurs the development of advanced and cellulosic biofuels,” Johnson said.

“In short, it is doing exactly what it was designed to do.”

The RFS originated in 2005 and was expanded in 2007 in hopes of mitigating carbon emissions and reliance on oil in the transportation industry. Johnson said that’s happened and, in turn, farm income has risen.

Johnson raises corn and soybeans with her husband, two sons and their families, in Floyd County. They also manage a seed business and are investors in ethanol and biodiesel plants. “There’s opportunity once again in rural America. Our two sons and a growing number of young farmers have returned to the farm after college,” Johnson said.

“Corn production has allowed our livestock industry, ethanol industry, and our communities to grow. Due to the tax revenues and job security that the RFS enables, my small community has a new fire station, a remodeled hospital, and my grandson’s kindergarten class in large enough to need another teacher.”

Some lawmakers claim the RFS isn’t working quickly enough to curtail fossil fuel emissions and it’s adversely affecting consumer food prices. Johnson disagrees. “Because the farm value of commodities represents such a small share of retail food prices, the impact of the RFS on food prices is indiscernible,” Johnson said.

“Higher energy prices as a result of increased petroleum costs play a much larger role. The World Bank found nearly two-thirds of the increases in food price since 2004 are the result of the increased price of crude oil.” Johnson closed her comments by noting that ethanol-blended fuels are saving motorists money.

“Last Friday, I filled my car at a station in Iowa with E-85 and it was $1.34 cheaper than E-10,” Johnson said. “The RFS is enabling families to choose a gas that is cleaner for future generations at a fraction of the price.”

The testimony from Johnson was part of a two-day hearing before the House Energy and Commerce Subcommittee on Energy and Power.