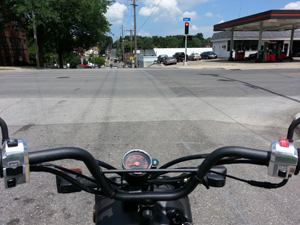 The operators of two-wheeled vehicles in Iowa must obey the same laws as those driving cars and trucks, but some traffic lights in the state can make that difficult.

Many of Iowa’s larger cities use what’s called an “induction loop” system to detect vehicles at intersections.

The problem for two-wheeled motorists is the sensors can fail to detect a moped or motorcycle, so without a larger vehicle at the signal, they’re stuck waiting for a light that’s not going change.

Mike Ring is the traffic engineer in Des Moines. “They sense based on the amount of metal that’s in a vehicle, so in a car or a truck there’s quite a bit of metal and in a motorcycle or moped there’s a lot less. We do try to set the sensitivity to pick up as many of those vehicles as we can,” Ring says.

The sensitivity, however, can’t be set too high because they’ll begin picking up vehicles passing by, rather than those right on top of the sensor. Ring says a moped or motorcycle has a better chance of being detected by sitting over the “cut” in the road where the magnetic sensors are buried.

“The worst spot to wait is if you’re right smack in the middle of (the loop)…you have the best chance of being detected if you’re actually over one of those wires,” Ring explains. But, if that doesn’t help, Iowa Department of Public Safety spokesperson, Lt. Robert Hansen says the only legal option is turning right on red.

“The other solution that I’ve found folks use, including myself, is that it’s legal to make a right turn when it’s safe, unless otherwise noted at intersections,” Hansen says. Ring says some states have passed laws allowing motorcycles and mopeds to go through red lights if it fails to turn green after a few minutes.

Another option for operators of two-wheeled vehicles is to get off the cycle and push the crosswalk button for pedestrians — which will then trigger the traffic signal to turn green. According to the Iowa DOT, more than 181,500 motorcycles are registered in the state. There are just over 17,600 mopeds or scooters registered in Iowa.