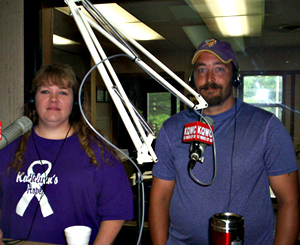 The parents of a central Iowa girl who was kidnapped and killed by a convicted sex offender in May are organizing a two-day petition drive next weekend.

The body of 15-year-old Kathlynn Shepard of Dayton was found in the Des Moines River near Boone in early June. The girl’s mother, Denise Shepard, wants Iowa lawmakers to pass a bill that will create a tougher law on sexual predators.

“We’re trying to pass a one-strike law, one time you would hurt a child, you’re away, that’s the main theme,” Denise Shepard says.

“Then when these cowards come out, get out of prison, having them monitored so we know where they are at all times.” Denise and her husband, Mike, say they have been overwhelmed by the outpouring of support in the weeks since Kathlynn vanished — and was found dead.

“Phone calls, cards, people have dropped off quilts,” Denise Shepard says. “We’ve had people send us emails from Japan and Egypt to tell us how sorry they are.” The Shepards have joined forces with the Chelsea’s Light Foundation to work on this proposed bill to protect children from violent predators.

The foundation is named after Chelsea King who was murdered in 2010 near San Diego, California. Mike Shepard says he was stunned to learn about the behavior of Michael Klunder, the convicted sex offender who authorities say kidnapped Kathlynn and killed himself the same day.

“Just because you’re a born-again Christian doesn’t mean you’re cured,” he says, “as in the case with Michael Klunder. The day before he abducted Kathlynn, he was at Bible study.” The weekend of August 3rd and 4th is being set aside for an all-out signing of the petition calling for a tougher law on sexual predators in the state.

A benefit ride is also planned for September called “Kickstands Up for Kathlynn.” It will feature two routes, starting in Des Moines and Algona and converging in Dayton for music, an auction and more. Learn more at the “Kathlynn’s Hope” page on Facebook.