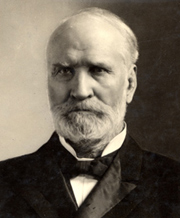 The historical museum in a Tama County town has expanded its display of artifacts about an Iowan who became a D.C. powerbroker known as “Tama Jim.”

James Wilson was born in Scotland in 1835. His family moved to Connecticut in 1851 and four years later began farming near Traer, in Tama County, Iowa.

Wilson became a state legislator, represented Iowa in congress for six years and did two stints as a professor of agriculture at what was then called Iowa State College in Ames.

In 1897, Wilson was appointed as the nation’s secretary of agriculture and he stayed in that role for 16 years, serving under three Republican presidents — William McKinley, Teddy Roosevelt and Robert Taft. No other cabinet secretary has served for a longer period.

Joan Reuman is treasurer of the Traer Historical Museum, where an exhibit about the man known as “Tama Jim” has been expanded.

“There was an exhibit before, but we just updated it and made it bigger and better,” Reuman says. “We had his suit and his top coat, his cane and top hat, a pocket watch and some other memorabilia that we thought needed to be out and on display and it hadn’t been and so we’ve got that in a case that’s protected.”

The exhibit also features a painting of Wilson and a sculpted bust of the long-serving ag secretary.

“It was in the (Traer) library for several years and there’s one just like it in Washington, D.C.,” Reuman says.

Some of Wilson’s relatives still live in the Traer area.

“His home is still intact and someone lives there,” Reuman says. “It’s a beautiful home yet, a brick structure.”

A re-dedication of the “Tama Jim” exhibit at the Traer Historical Museum was held last Saturday. Tom Vilsack, the current U.S. Ag Secretary, was there and he was still talking about it during an appearance in Ames this week.

“Tama Jim started his 16-year career as ag secretary at age 62, so just get your arms around that,” Vilsack told the crowd at the Iowa Farm Bureau’s economic summit.

“Secretary Vilsack, records are to be broken. Twelve more years,” Hill said, drawing laughter from Vilsack and the crowd. Vilsack has been ag secretary for about four-and-a-half years.

Hill noted Wilson was serving as agriculture secretary during an important period of farm expansion.

“Jim Wilson had, for him, the implementation of the Homestead Act and there was still frontier in America during that time period and he was giving away farms — 160 acre farms if you would merely reside on that farm for five years and homestead it,” Hill said. “Not a bad job.”

Wilson earned the nickname “Tama Jim” while he was in congress, to distinguish himself from a U.S. Senator from Iowa who was also named James Wilson.

The museum in Traer is open by appointment. To schedule a visit email [email protected].