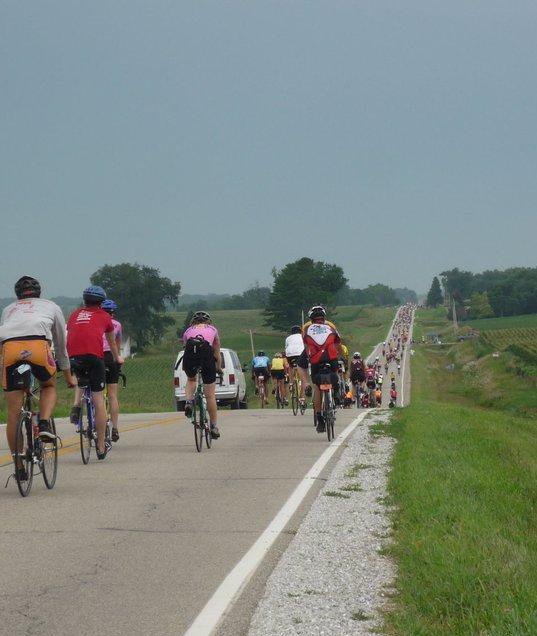 The 41st edition of the great bicycle ride across Iowa will conclude today as the thousands of RAGBRAI participants pedal into Fort Madison.

Business owners in the Mississippi River town are bracing for the massive rolling city to arrive.

Sue Saunders runs the Ivy Bake Shop and expects it to be a very long day.

“I have told the staff we will feed people until they’re no longer walking in the door,” Saunders says.

The first riders will be arriving not long after sunrise, completing their week-long, 400-plus mile trek across Iowa.

Hundreds of riders were actually in Fort Madison a week ago, leaving their cars in designated lots so they could catch a charter bus to Council Bluffs to begin the ride. Saunders was open late that night, too, serving the cyclists dinner.

“It was awesome,” Saunders says. “There were just so many people that, you love getting their story. Are they doing their first one? Have they done many RAGBRAIs? It was a great, great evening. We were thrilled.”

Sam Fiorella owns a store called Pendemonim and is a member of the Board of Directors for the Shaeffer Pen Museum, both of which are right along the RAGBRAI route. She recalls the last time the bike ride came through town years ago.

“It was the single-biggest retail sales day we have ever had in the history of being in Fort Madison,” Fiorella says.

The ride has attracted many thousands of cyclists from around the world, the vast majority of whom will be heading for Riverview Park over the next several hours. Fiorella says they’ve been planning for this day for weeks.

“We started rounding up volunteers, our crew of volunteers to be here at the museum knowing that there will be 10,000 or so people coming through town in a very short period of time,” Fiorella says. Some estimates have said 24,000 riders are on the journey this year.

After they head for the Mississippi River to dip their front tires in the water, according to the tradition, merchants hope they’ll ride back into town and dip into their wallets.