You are here: Home / Military / Colonel Bud Day remembered as “a man among men” 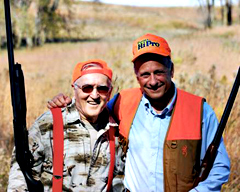 Colonel Bud Day and Congressman Steve King during a hunt.

A public memorial service is being planned to honor Sioux City native and war hero Bud Day who died Saturday at his home in Florida at the age of 88.

Day was awarded the Medal of Honor for his actions as a prisoner of war in Vietnam, where he was credited with keeping the other prisoners strong during brutal interrogations.

“Among those Medal of Honor recipients, among those POW’s, Colonel Day was a man among men and a legend, snd someone that they all wanted to spend quality time with,” McGowans says. “Because he was a man of the highest personal and professional integrity, a true warrior, and a patriot in every sense of the word.”

Iowa Congressman Steve King, a Republican from Kiron, was a friend of Day’s and described him this way. “A relentless warrior spirit, and a patriot and a good Christian man and a family man,” King says. “Of those who I have had the privilege of being around — and I’ve met some extraordinary people — I think that we have lost America’s greatest hero. He was America’s greatest living hero, and now Bud Day takes ranks with the giants in American history.”

Arizona Senator John McCain — one of the other POWs in the “Hanoi Hilton” in Vietnam with Day– released a statement on Day’s death:

“Today brings the sad news that my dear friend and comrade, Colonel George E. ‘Bud’ Day, USAF (Ret.) has passed away. I owe my life to Bud, and much of what I know about character and patriotism. He was the bravest man I ever knew, and his fierce resistance and resolute leadership set the example for us in prison of how to return home with honor. I will have much more to say about Bud’s courage, kindness and sense of honor and duty this week. For now, I want to draw Americans’ attention to the passing of this good man and great patriot, and to extend my deepest, most heartfelt condolences to Bud’s wife, Dorie and his children. I will miss him terribly.”

Day campaigned with McCain in Iowa when the Republican Senator ran for president in 2008.