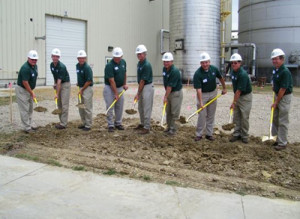 Officials with Quad County Corn Processors break ground for an upgrade to the plant in Galva.

An ethanol plant in northwest Iowa plans to use a newly developed process to churn out more product using the same amount of corn. Quad County Corn Processors broke ground Monday on an $8.5 million project at the company’s plant in Galva.

The improvements will add the capability to convert corn kernel fiber into cellulosic ethanol.

The plant currently makes 35 million gallons of ethanol a year, but plant engineer Travis Brotherson says the new technology will produce about 6-percent more ethanol from same amount of corn

“We also get much more corn oil — about 300-percent more corn oil than we get out currently. So, that’s another pretty large piece with this process,” Brotherson says.

“And by fermenting out the fiber, our co-products also become a lower fiber, higher protein product.”

It’s believed Quad County Corn Processors will be the first plant in the country to produce corn-based ethanol, cellulosic ethanol, distillers grains and corn oil all from the same kernel of corn.

The Galva plant currently has 35 employees, but Brotherson says they hope to add five more when construction is completed next April. Iowa has 41 ethanol plants, with three cellulosic ethanol facilities currently under construction, according to the Iowa Renewable Fuels Association.