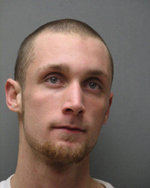 Eastern Iowa authorities are seeking the public’s help in finding a man accused of child endangerment and drug crimes.

According to the Iowa Department of Public Safety, “several arrest warrants” have been issued for 20-year-old Troy Allen Laufenberg of Monona.

On Monday of last week officers received a report of an injured child at the home Laufenberg shared in Monona with his girlfriend. The unidentified child, who is not Laufenberg’s kin, remains in the hospital. The home was searched last Friday.

Laufenberg faces a charge of felony child endangerment as well as misdemeanor charges for drug possession. Authorities say this is not his first run-in with the law.

Monona — the town where Laufenberg was living — is in Clayton County, in far northeastern Iowa.

According to online court records, Laufenberg pleaded no contest last December to meth-related charges in Wisconsin. He had been picked up, along with three others from Dubuque, in a vehicle on a highway near Plattsville, Wisconsin in November of 2012. Authorities found the ingredients for meth as well as marijuana in the car.

(This story was updated at 3:14 p.m. with additional information.)