You are here: Home / News / State treasurer undecided about running for governor 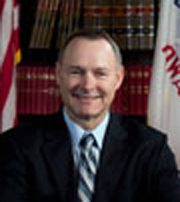 A Democrat who’s had his name on the Iowa’s statewide, General Election ballot eight times is still mulling the idea of running for governor in 2014.

“One day I’m leaning like I’m going to do it, and one day I’m not, so I’m in the middle ground yet,” Fitzgerald said.

It will be several weeks before Fitzgerald will announce his final decision.

“Probably late September because I’ve been talking to a lot of folks, but that’s probably when I will do it,” Fitzgerald said.

Fitzgerald, a Marshalltown native, won his first term as state treasurer in 1982 and he’s been reelected seven times, but Fitzgerald said running for governor is an entirely different kind of statewide campaign.

“I can’t accept any money now. I’m not asking people now, but that’s part of the feedback,” Fitzgerald said. “‘Mike, can you raise the money?’ ‘Mike, I’ll support you.’ Those kind of things…I’m trying to get that kind of feedback of: ‘Would it make sense to move forward?'”

State Representative Tyler Olson of Cedar Rapids and former legislator Bob Krause are running on the Democratic side and State Senator Jack Hatch of Des Moines has indicated he’s likely to run, too.

This week Senate Democratic Leader Mike Gronstal announced he will not run for governor, but said he is “confident” his party can nominate someone who can beat incumbent Republican Terry Branstad. Branstad is laying the groundwork for a 2014 reelection bid and has hired eight full-timers to work on for campaign, but Branstad has said he won’t make a formal announcement about a bid for a sixth term until next year.