You are here: Home / Education / State board won’t change rule on the start date for schools (Audio) 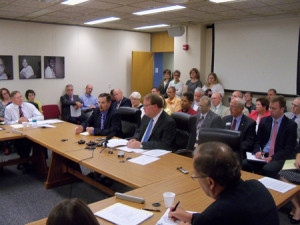 Several people turned out for comments on the Board of Education’s vote on the school start rule.

The State Board of Education voted 5-2 today against moving forward with a change in rules that would have made it tougher for schools to get a state waiver to start school in August.

The vote was preceded by comments from representatives of the tourism industry who favor the change, and educators, who have been against it.

Daniel Smith, the director of School Administrators of Iowa, said the state should keep the current approach as it is a matter of local control over the issue.

“It also appears that the proposed rule change does not take into consideration the negative or potential negative impact on the coordination of calendars between school districts, community colleges, universities and the many student activities that routinely begin in early August,” Smith said.

“At a time when there is a renewed commitment to excellence in Iowa schools, it is important that local schools have the flexibility in their calendars to promote student achievement.”

David Cunningham of Norwalk spoke to the board as a parent, and agreed individual districts should make the decision. “The educational excellence of our schools should be left up to those who we as communities hire and entrust with the purpose of educating our children. Not with the tourism business and the tourism lobbyists of the state of Iowa,” Cunningham said. 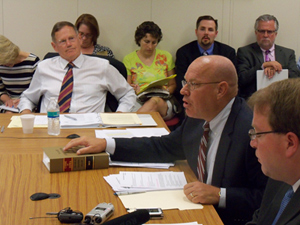 Brian Johnson, a lobbyist for the Iowa State Fair, places his hand on a code book as he speaks to the State Board of Education.

Iowa State Fair lobbyist, Brian Johnson sat down with a law book and made his argument.

“We wouldn’t be here if it hurt education, and I would be happy to sit down at anybody, anytime, anywhere and talk about studies — hard facts that show that. We just heard that this ought to be left up to local representatives and those that are elected. It is, it is in 270-point-10 of this code book. And it’s existing law,” Johnson said.

The new rules would’ve required schools to show why they needed to start early. Johnson said that’s the problem with what’s happening now, waivers are granted by the Department of Education director without an explanation from school districts.

“There is no process now. We talk about the processes working, there’s never been a process. We don’t know who, why. what, where, why, the decision was made not to follow state law,” Johnson said. “We respectfully ask you to follow the state law and the rules that exists in the state of Iowa.”

Board of Education member, Charles Edwards, said he has gotten more e-mail and comments on this issue than anything he has ever been associated with. He said he was upset the board had been placed in a position to choose tourism over education, but said the board’s duty is to education and it should take priority.

“As much as I respect those folks who have spoken on tourism and the impact of tourism in Iowa –and certainly understand and respect what they are saying — and don’t want that to be an outcome of this. But I think we have to look at what’s in the best interest of Iowa students,” Edwards said.

Board member Mike May is a retired teacher who now runs a resort. He defended the tourism industry.

“Tourism people are good people, they don’t want to ruin education, they don’t want to hurt kids as is being suggested. They don’t put money before kids, nothing could be further from the truth. In fact the truth is, I think the better part of their education in many cases is achieved through that summer job that they have,” May said.

He said he knows from personal experience as he hires 25 kids to work for him every summer. May also said he sees the impact on his resort as the bookings drop off in mid-August now that many school districts are starting school earlier. May and LaMetta Wynn were the only two board members to vote to move forward in the rule process.

Mike Cormack with the Iowa Department of Education said the rule came after much discussion and he thought it presented a fair compromise for both sides. He said after the vote he was disappointed that it will not move forward.

“There’s legitimate arguments for both sides of this. We believed that for all of Iowa it would have been a benefit to go forward with these and we would have heard more in the public hearing process. But, that’s the way it is, sometimes you win in this process and sometimes you don’t,” Cormack said.

If the rule had been approved today, it would have moved forward to a public hearing on September 10th.

Audio: Board of Education public comments on school start rule. 32:00