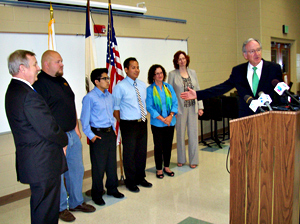 Senator Tom Harking (right) with panelists from the immigration forum.

Senators Tom Harkin of Iowa and Dick Durbin of Illinois held a forum today in Ames, to counter Congressman Steve King’s recent “calves the size of cantaloupes” comment about so-called DREAMers — young people illegally brought into the country by their parents when they were children.

King contends there are far more drug smugglers among the DREAMers than valedictorians.

“We Iowans are a welcoming people,” Harkin told the crowd of nearly 300. “…We do not believe in characterizing people with hateful, spiteful, degrading language and we believe those who want to come here to work, to build a better life are not criminals.”

Harkin and Durbin held the forum in Ames, which is in King’s congressional district.

“The suggestion that these are petty criminals or drug smugglers — it just doesn’t square with the reality of the DREAM Act and that’s one of the reasons why I wanted to come here today,” Durbin told the crowd.

Both senators cited a recent survey in the district by a Republican polling firm which found a 70 percent majority of voters support a path to some sort of legal status for illegal immigrants.

“Almost two-thirds of the people that live in this congressional district support a path to citizenship,” Durbin said, to applause from the crowd.

King was booed once, during a discussion of his amendment which would undo the Obama Administration’s order giving DREAMers temporary legal status in the country. Eduardo Rodrigues was illegally brought into the country by his parents when he was one and he grew up in Orange City, which is part of King’s district.

“His district is changing…People are beginning to build a relationship with the local immigrant community and they’re realizing the struggle and the hardships that they’re going through,” Rodrigues said. “…Something that’s missing from Representative King’s speech is the human aspect because I doubt he knows any DREAMers or undocumented youth and their stories in the way he talks about them.”

Rodrigues recently graduated from Northwestern College in Orange City and has a work permit, but would have to go to Mexico if King’s amendment were to become law.

King issued a written statement this morning about the forum.

“I will not be responding to political initiatives during the time flags are flying at half staff for America’s most decorated hero, Col. Bud Day, of Sioux City. There will be time after the last notes of taps echo off the Iowa bluffs,” King said.