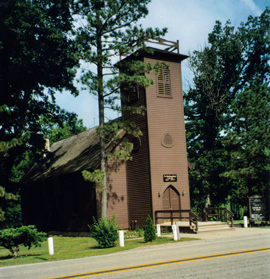 A historic country church in northeast Iowa will welcome couples this weekend who were married there in past years.

Pastor James Mann, of the Little Brown Church near Nashua, says the reunion weekend is focused on honoring those couples and letting some of them show off by singing the famous hymn about the place of worship.

When Pastor Mann and his wife came to the church six years ago, they created an annual talent show to see who could sing the song the best. “We’ve heard it played on kazoos and sung in Japanese and played on guitar, we have a keyboard — it’s really quite a fun event,” Mann says.

The reunion draws married couples from all over the country, some from other nations, to the tiny church. “Sunday morning, during our 10:30 worship service, couples will want to stand and renew their vows and that’s quite a moving experience,” Mann says.

“We’ll probably have roughly 300 people here and we’ll invite the ones into the sanctuary who’ve been married 50 years or more.” For all the rest, they’ll be seated outside the small structure under a tent equipped with speakers. Mann says there is a purpose to the weekend celebration.

In the six years Pastor Mann has been at the Little Brown Church, he has performed some 12-hundred wedding services. Learn more about the church at www.littlebrownchurch.org.