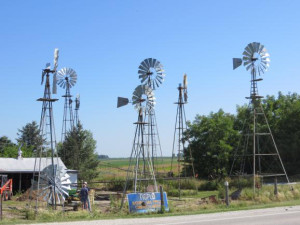 Modern wind turbines are now a common site across the Iowa countryside, while old fashioned windmills are rusting away on abandoned farmsteads.

But, a central Iowa man is working to preserve the crumpled icons. Jimmy Boll grew up with the steel and wooden windmills, and he has more in one place than anyone around.

“Well, when we sold the farm there was a windmill down in field that I used to play on all the time when I was a kid. About year later, I started fixing it up and people came by and said, ‘who’s fixing your windmill? I need mine fixed.’ That’s how it all started,” Boll says.

There are 13 full-sized windmills standing on Boll’s acreage, located along Highway 44 between Grimes and Dallas Center.

Boll estimates he’s actually saved and repaired more than 100 of the structures, which date back to 1892. Boll survived the Vietnam War and cancer surgery, and he has no fear of heights. 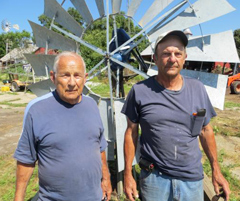 “The last one we put up in January is probably 50-55 feet high and I didn’t have any oil in the gear box yet, so one day I got up there on the platform and I thought, my gosh, I’m way up in the air, I could see two or three towns,” Boll says. If he’s up that high, Bolls wears a safety harness.

Unlike today’s giant turbines, the old windmills didn’t make electricity. But, their job was just as important: to pump water to the surface before rural America was electrified.

Gary Stanford is Boll’s friend and helper, and says there are more old windmills around than most people notice.

“Just start looking off in a distance, you’ll see an old tower and it’ll be missing the head. It’ll be out in the middle of a field, or they’ll be a grove of trees…if you look close, you’ll see one back in there that used to be an old homestead. There’s a lot more around yet,” Stanford says.

Boll occasionally sells the old windmills he rebuilds. Blank Park Zoo in Des Moines bought one that is spinning over its Australian outback exhibit. Boll is currently rebuilding a New Elgin Model 8, with 18 tin blades. He says it’ll be raised any day now — number 14 in the rare collection of antique farm machinery — which is essentially a functioning windmill museum along Highway 44 in Dallas County.