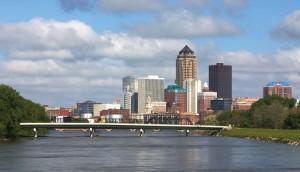 Greater Des Moines Partnership CEO Jay Byers says Des Moines topped the same list back in 2010. “There are a number of reasons why Greater Des Moines continues to get these top rankings. It’s our competitive cost of doing business, our great quality of life, and it’s our existing industries,” Byers says. “All of those working together make Greater Des Moines a great place for business and careers.”

Forbes 15th annual list of Best Places For Business and Careers was released Wednesday. The article cites Des Moines as being “the only place that ranks among the top quartile in at least nine of the 12 metrics” that Forbes graded the cities on.

The article also highlights Des Moines’ “strong foothold in finance and insurance.” Wells Fargo recently announced a $100 million expansion in the area. Principal Financial is putting $250 million into an expansion of its headquarters in downtown Des Moines.

Forbes states businesses costs in the Des Moines metro are 17-percent below the national average and 36-percent of the area’s population has a college degree.

Following Des Moines on this year’s list of Best Places For Business and Careers are Provo, Utah and Raleigh, North Carolina. Lincoln, Nebraska is fourth on the list. Omaha is ranked 17th.