You are here: Home / Agriculture / Mercy for Animals plans protests at Iowa stores 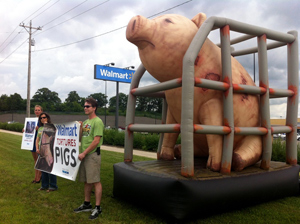 Members of an animal rights group are staging protests outside two Iowa Walmart stores this week as part of a regional demonstration.

Jeni Haines, national campaign coordinator for Mercy for Animals, says they want to call attention to the use of gestation crates by pork producers, who produce pork she says Walmart sells.

“Keeping highly-intelligent, social animals confined in cages that are so small, they can’t even turn around for nearly their entire lives is blatant animal cruelty,” Haines says.

“It’s time for Walmart to follow the lead of Kroger, Costco and their other competitors by committing to phase out the use of cruel, gestation crates.” Haines says other states and countries have outlawed the practice.

“It’s already been banned by the entire European Union and nine U.S. states,” she says. “Walmart, as a corporation of their size, they certainly have the power and the ethical responsibility to help stop one of the cruelest factory farming practices by ending the sale of crated pork.”

Haines says Mercy for Animals members will protest in front of a Sioux City Walmart today (Wednesday) and in Ottumwa on Thursday.