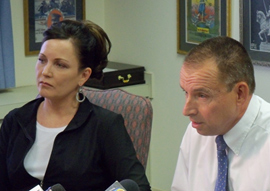 Larry Hedlund talks to reporters as his wife Michelle listens.

The Department of Criminal Investigation agent who was fired two days after he reported seeing the governor’s SUV speeding has filed a lawsuit saying his firing violated the state whistle blower law.

Larry Hedlund also is asking that the Iowa Department of Public Safety be held in contempt for releasing a confidential report on his firing to the retired judge the governor appointed to investigate the case.

“It alleges among other things that in the months before the incident with the governor occurred that Larry had made a series of internal complaints about issues in the department, and then sort of the straw that broke the camel’s back was the incident where he caught the governor, reported it to his superiors, and then two days later he was taken out of service and eventually terminated,” Duff says.

Part of Hedlund’s complaints were aimed at his supervisor, Gerard Meyers, the Assistant Director of Field Operations. Hedlund says Meyers failed to return phone calls, text messages and emails, which he claimed was “hampering and impairing the ability of field agents to effectively and efficiently perform their duties.”

Hedlund says the new Public Safety Commissioner used implied threats of demotion or firing if people did not do things his way. The lawsuit names the Commissioner of the DPS, the director of the DCI and Meyers.

Duff says the lawsuit does not name the governor at this time because there is a process that is required by state law before the governor can be added to the suit. He says they will likely file a defamation suit against the governor for what he said about the case in a news conference. 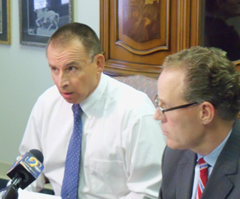 “We are looking to have Larry’s reputation restored is the ultimate goal. And for him to be fairly and adequately compensated for his financial losses and the loss of his career,” Duff says.

He says Hedlund, who is 55, had planned to work up to the mandated retirement age of 65, so the loss of that in come and other benefits could total seven figures.

Hedlund, who is from Fort Dodge, says he spent years building his career and reputation as a law officer and that was taken away from him. One of the questions raised by his supervisors was why Hedlund was driving a state vehicle the day he called in about the governor’s speeding car.

Hedlund says he had emailed Meyers about taking a vacation day, but had not heard back. He says he took the state car to go and talk about cold cases with an investigator and says the claim that he did not let his supervisors know he was not on vacation doesn’t make sense.

“It’s ludicrous for them to says that I’m out of reach or out of touch or causing any kind of problem, because we are on call 24-hours-a-day, every day of the year,” Hedlund says. He says being taken out of service and then fired from the job he loves has been tough to deal with.

“Well, the whole situation has been difficult. I’ve stayed busy just trying to get things in order dealing with this situation, so it’s certainly not like I’m sitting home not doing anything,” Hedlund says. “It’s different, it’s not productive work, it’s not solving cases, helping agents solve cases, or providing services to help solve cases.”

Attorney Duff says it could take several months before the case goes to trial. He was asked if they would consider a settlement to end the issue.

“I guess my response to that would be that I am always open to talking with the other side about settlement, I never close that door,” He replied. “Do I think that is likely to happen anytime soon? My guess is no. But, at some point in the next year to year-and-a-half, could there be settlement negotiations? I guess that is possible.”