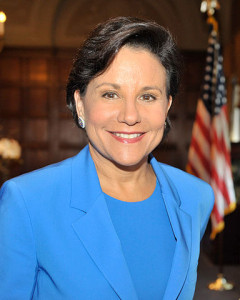 The Senate confirmed Pritzker to job in late June and she promised to serve as “a bridge” between the business community and the White House. “The president asked me if I would serve that purpose and obviously it’s a two-way bridge,” Pritzker said. “It’s an opportunity fom me to hear what the issues are on the minds of business leaders and bring that information back to the White House.”

Pritzker has been spending much of her time visiting with CEOs of manufacturing operations. She’s hearing concerns about qualified workers, so she’s encouraging young people to consider careers in manufacturing.

“The manufacturing job of today is quite varied,” Pritzker said. “There are some aspects that require managing computers, you’re running machines, you’re managing inventory…it’s a very dynamic job today, so I think it’s a wonderful opportunity.”

Pritzker spoke to Radio Iowa by phone from Pella, where she took a tour of Vermeer Corporation. The company has manufactured agriculture, environmental, and construction equipment for over 65 years.

Pritzker said, like most U.S. manufacturers, officials with Vermeer are pushing for expanded trade relations to move products into more markets. “They were very excited about the trade agreements that were approved in the first (Obama) administration. Now, they’re interested in the new negotiations that are going on both with Europe and with the south Asian countries regarding new trade agreements,” Pritzker said.

According to a study conducted by Iowa State University, manufacturing comprises over 18 percent of Iowa’s GDP, which is sixth among all states in its percentage of GDP from manufacturing.

Pritzker, who is an heiress to the Hyatt hotel fortune, will also make an appearance at the Iowa State Fair in Des Moines this afternoon.