You are here: Home / Fires/Accidents/Disasters / Iowa getting drier as Missouri gets more rain than needed 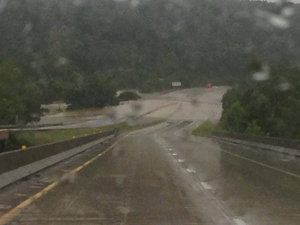 The Rolla Missouri Fire Department posted this photo on Facebook of flooding over Interstate 44 at Jerome, Missouri.

The drought is worsening again in Iowa as heavy rains are causing devastation just to the south. Parts of Missouri got ten inches of rain overnight, bringing flash-flooding, evacuations and at least two deaths.

“It’s brought in a lot of dry, cool air here to the state of Iowa whereas down to the south, there’s been an area of low pressure swinging through and it’s not quite reaching us,” Kotenberg says.

“The low pressure and dry air is pushing that low to our south, serving as a shield, preventing that moisture and energy from reaching the state up here.”

While areas of southern Missouri have seen 15-inches of rain in the past two days, parts of Iowa haven’t seen more than an inch of rain in weeks, and there’s little hope in the forecast — for either state’s misery. “We should be dry Friday, Saturday, Sunday, maybe a little bit of a chance (of rain) as we head into Monday, but otherwise, it’s looking dry up here,” Kotenberg says.

“Down to the south, Missouri will probably be getting more rain this afternoon into Saturday, so unfortunately, it does not look like they are out of the woods quite yet.” A report released this week shows the drought situation worsening in Iowa.

“A good majority of the state is at least abnormally dry,” Kotenberg says. “Basically the only part that’s above average or near average is the far northeastern portions of Iowa. Interestingly enough, Des Moines is now almost one inch below normal on the year, while the Waterloo area is about ten inches above normal for 2013 on precipitation.”

A week ago, only 0.02% of Iowa was in drought. Now, about 16% of the state is seeing drought conditions, mostly in the west and southwest.