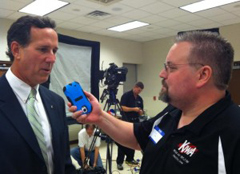 Pennsylvania Senator Rick Santorum was the keynote speaker at a Republican fundraiser last night in northwest Iowa. He won the Iowa Caucuses in 2012 and is considered a likely candidate for president in 2016.

While he did not discuss his intentions last night, Santorum said he came to Iowa to encourage other Republicans to “stand up for what they believe in.”

“Our party is at a crossroads. We need to fight for the soul of our party and stand up for the values that made our country great, and not move to the left or to the right, but stay where we are – stay with the first principles of our country. That’s what conservatism is all about. That’s what Republicanism is all about,” Santorum said.

Just over 350 tickets were sold for the event in Rock Rapids. Santorum told the crowd he’s concerned about the direction of the GOP.

“We need a strong national security and we need to stand for the values that made the country great,” Santorum said. “That’s what I’m here to do, to sort of sound the alarm.”

The Lyon County Republicans hosted the event, which also included speeches from Secretary of State Matt Shultz, Congressman Steve King, and Lieutenant Governor Kim Reynolds. Santorum plans to visit the Iowa State Fair in Des Moines today and will be among the speakers at the “Family Leadership Summit” in Ames on Saturday.